This functionality is implemented using Javascript. It cannot work without it, etc...

Mrs. Cynthia S Lounds is currently the Executive Director of Piedmont Community Action, Incorporated (PCA) as of 2017. In 2011, Mrs. Lounds hired as the agency Community Economic Development Director (CEDD). During those years as the Economic Development Director, she managed the Community Services Block Grant Program (CSBG), Low-Income Heating Energy Assistance Program (LIHEAP), and Weatherization Program where she made many strides. Due to her extensive experience in the housing arena, she secured the SC HELP Foreclosure Prevention Program funds to assist hundreds of homeowners in the upstate maintained their homeownership. Housing Trust Fund (HTF) is another program; she was able to secure in helping to subsidized weatherization services for house owners with low income. Mrs. Lounds is the first female Piedmont Community Action employed as the Executive Director. Because of her accomplishments and successes since attaining the Executive Directorship of Piedmont Community Action, Mrs. Lounds was nominated as a candidate for the “FREDDIE WILLIAMS” Memorial Award, which was presented at the 2019 South Carolina Action Partnership, and South Carolina State Head Start Association Statewide Spring Training Conference held April 22-26, 2019 at Myrtle Beach, SC. The Board Chair, Dr. Carol McFadden, several board members, and staff were there in celebrating and supporting this prestigious award given to the upmost deserving Executive Director, Mrs. Cynthia S Lounds. She has been a light at the end of the tunnel! 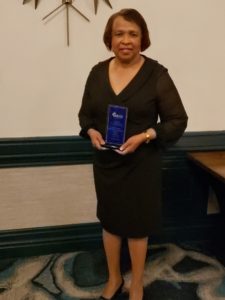